THE GOOD TIME CLOCK IS BACK AT CERMAK PLAZA!

Come see the magic for yourself at Cermak Plaza in Berwyn Illinois at the corner of Harlem and Cermak!

The Good Time Clock is a magical motion machine. It has delighted children and adults who have visited Cermak and Plaza for more than 40 years.

The balls clank up the conveyor like the start of a roller coaster and then cascade down taking a different paths; clanging banging and ping-ponging into different noisemaking, musical obstacles.  It is true that it is a piece of art, it is also true that the Good Time Clock is a piece of joy. This sheer magical delight it brings to visitors is a joy to behold.

The “Good Time Clock” will make you smile.

John Phelps the Maintenance Superintendent of Cermak Plaza in Berwyn Illinois gets ready for the unveiling of the restored Good Time Clock. The Good Time Clock was originally installed at Cermak Plaza in January 1982. The art piece has been completely refurbished and installed in a custom made case to protect it from the elements and fit in with the architectural style of the shopping center. Children and adults love the playful motion and sounds of the Good Time Clock. It have been a favorite at Cermak Plaza for almost 40 years. Just in time for it’s 40th anniversary at Cermak Plaza the Good Time Clock has been reinstalled in a custom glass case in front of Marshalls at 7163 Cermak Road in beautiful Berwyn, Illinois.

The Good Time Clock was created by Evanston native George Rhoads (January 27, 1926 – July 9, 2021) and originally installed at Cermak Plaza in December 1982.  The art piece was commissioned by David W. Bermant who had at least 5 other variations of the ball machine created by Rhoads between 1980 and 1992.

Michael Flight of Concordia Realty Management, Inc. says “Art has been a big part of the history and success of Cermak Plaza.  David Bermant, the original developer of Cermak Plaza, had a vision that kinetic art improves the shopper experience and makes for truly unique places to enjoy.”

The Cermak Plaza “Good Time Clock” has been completely restored by former Berwyn resident Mike Helbing Studios.  The case was designed by Chris Gazso of Gazso Design Inc. and constructed by Euro Architectural Products along with Anderson Construction.

George Rhoads (January 27, 1926 – July 9, 2021) was a contemporary American artist who was best known for his kinetic sculptures (ball machines) that can be found public places worldwide including museums such as the Chicago Art Institute, the New York Museum of Modern Art, Museum of Science Boston in addition to children’s hospitals, shopping centers, airports, and parks.  Rhoads originally attended the University of Chicago studying math and physics and then transferred to the Art Institute of Chicago to study design. 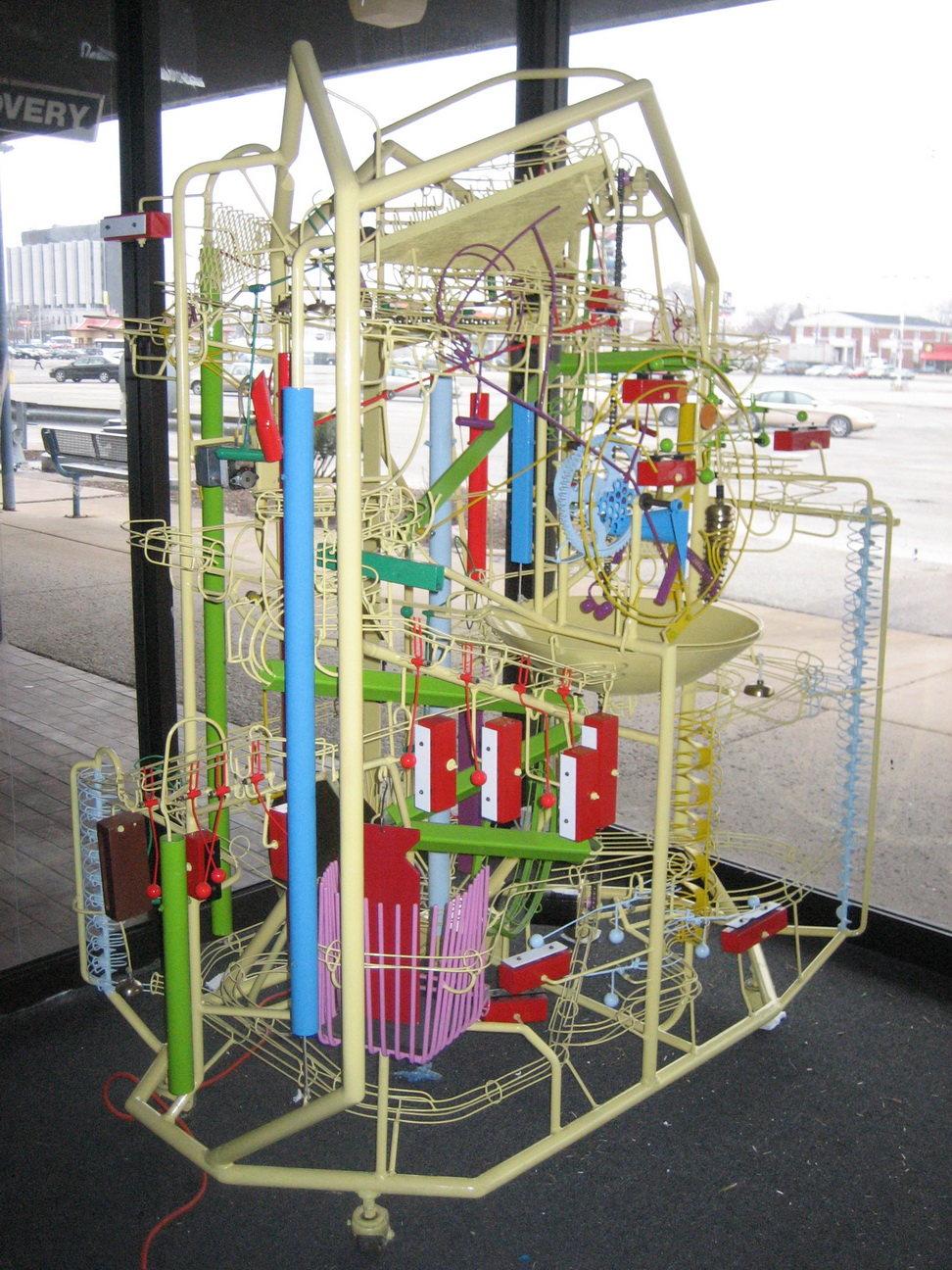 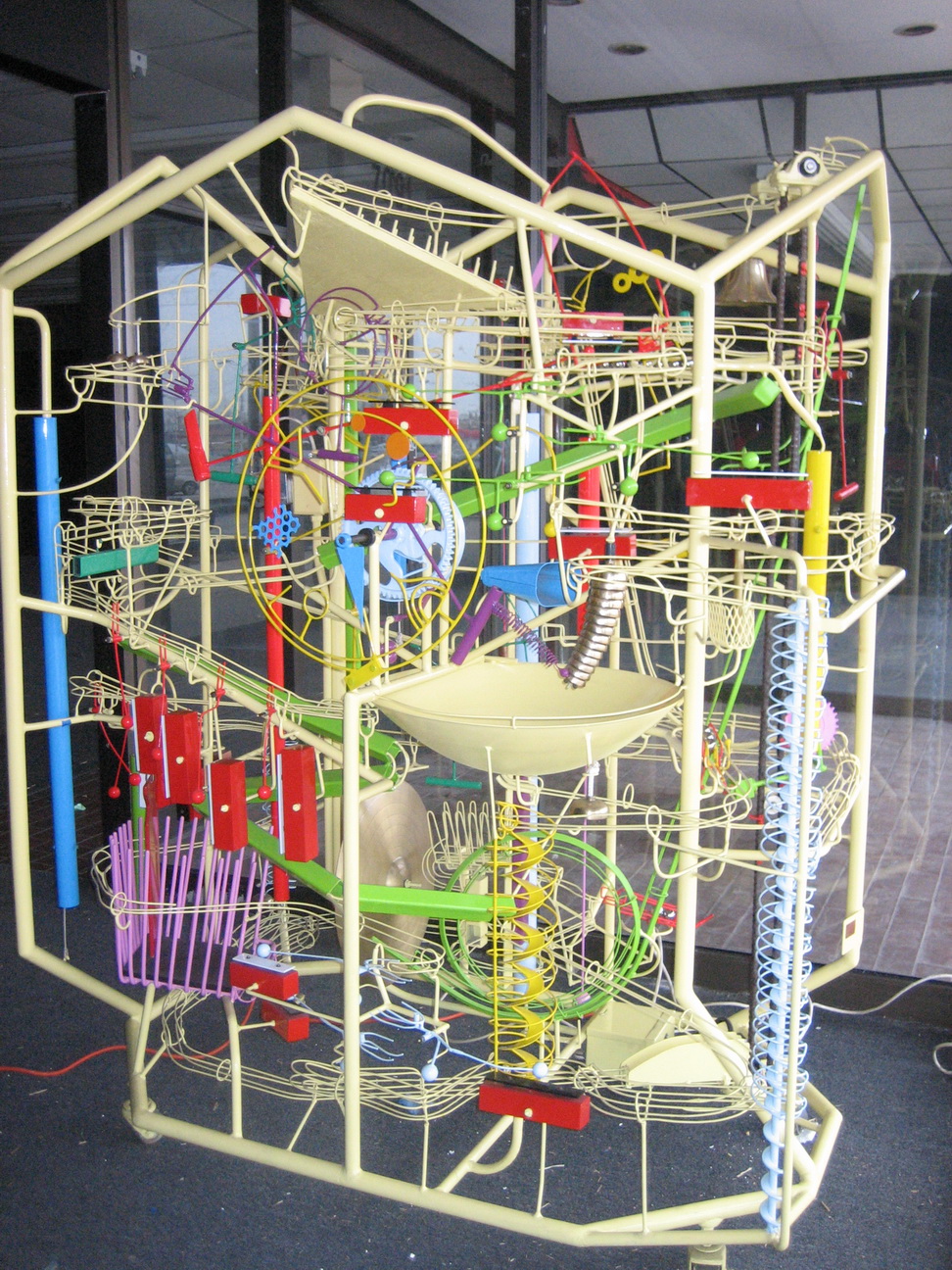 As of 2015 the Cermak Plaza “Good Time Clock” has been completely restored by Mike Helbing Studios.  http://www.helbingstudio.com

The clock is operated by an electric motor.  Balls are carried to the top by a chain with hooks, are dumped onto a track which divides by means of swi tches into six·· tracks.  The balls cause 5 chimes and numerous bells to be struck, and perform acrobatics, including loop-the~loop. The clock keeps good time, but not the kind that will tell you when you have to do something.  There is a cuckoo that sounds periodically.  The clock is made of welded steel, took a year to build, and uses chromium plated steel balls, 1/2″ in diameter. 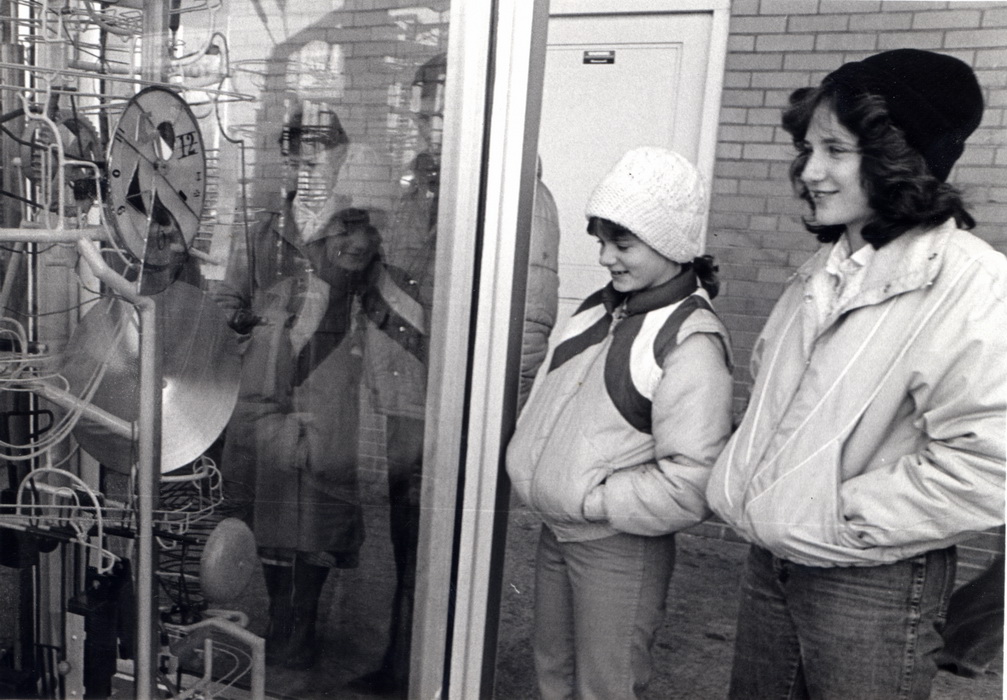 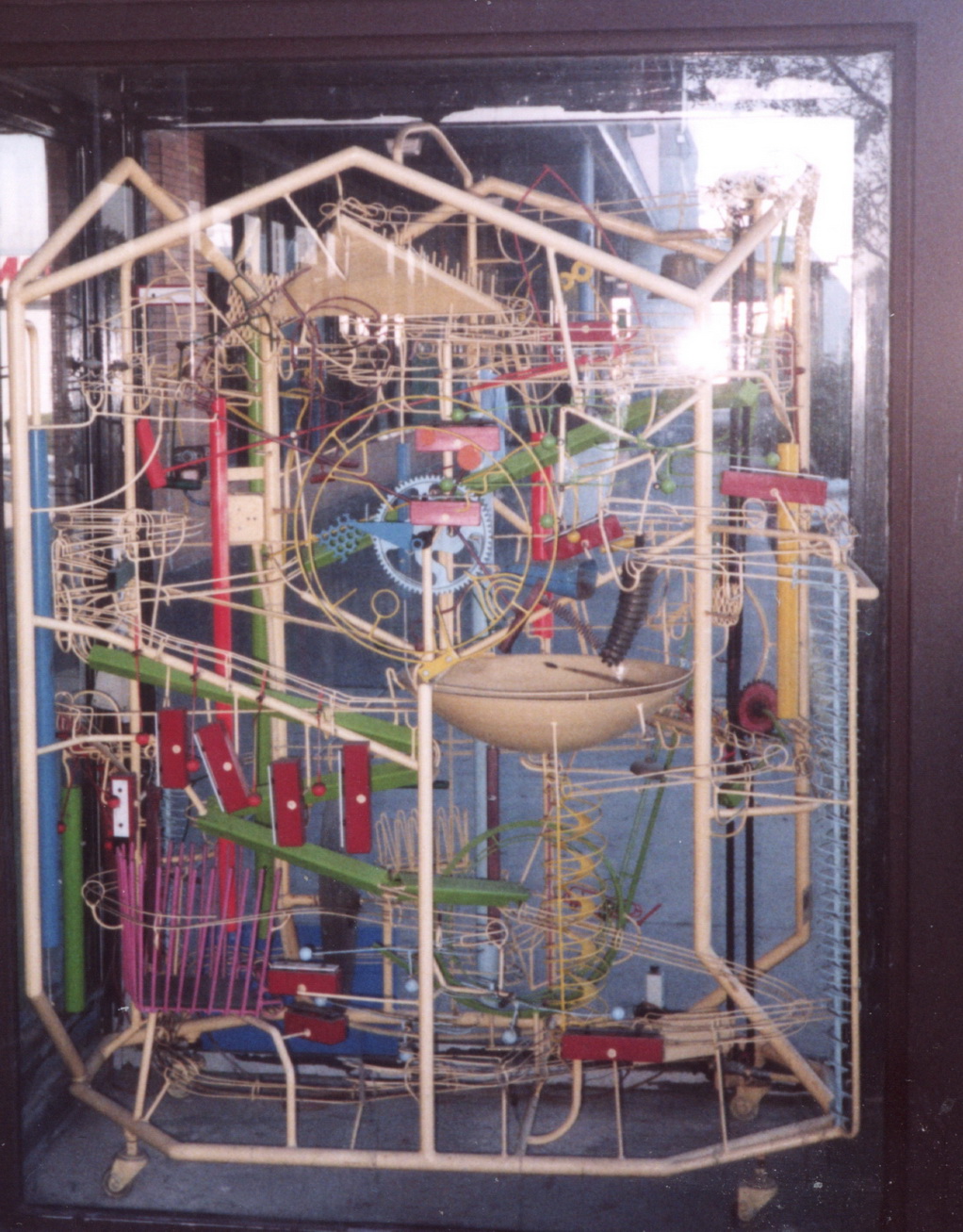 David W. Bermant was responsible for selecting the art.  Sometimes his purchases and installations were controversial but everyone  who saw the Good Time Clock really liked it. 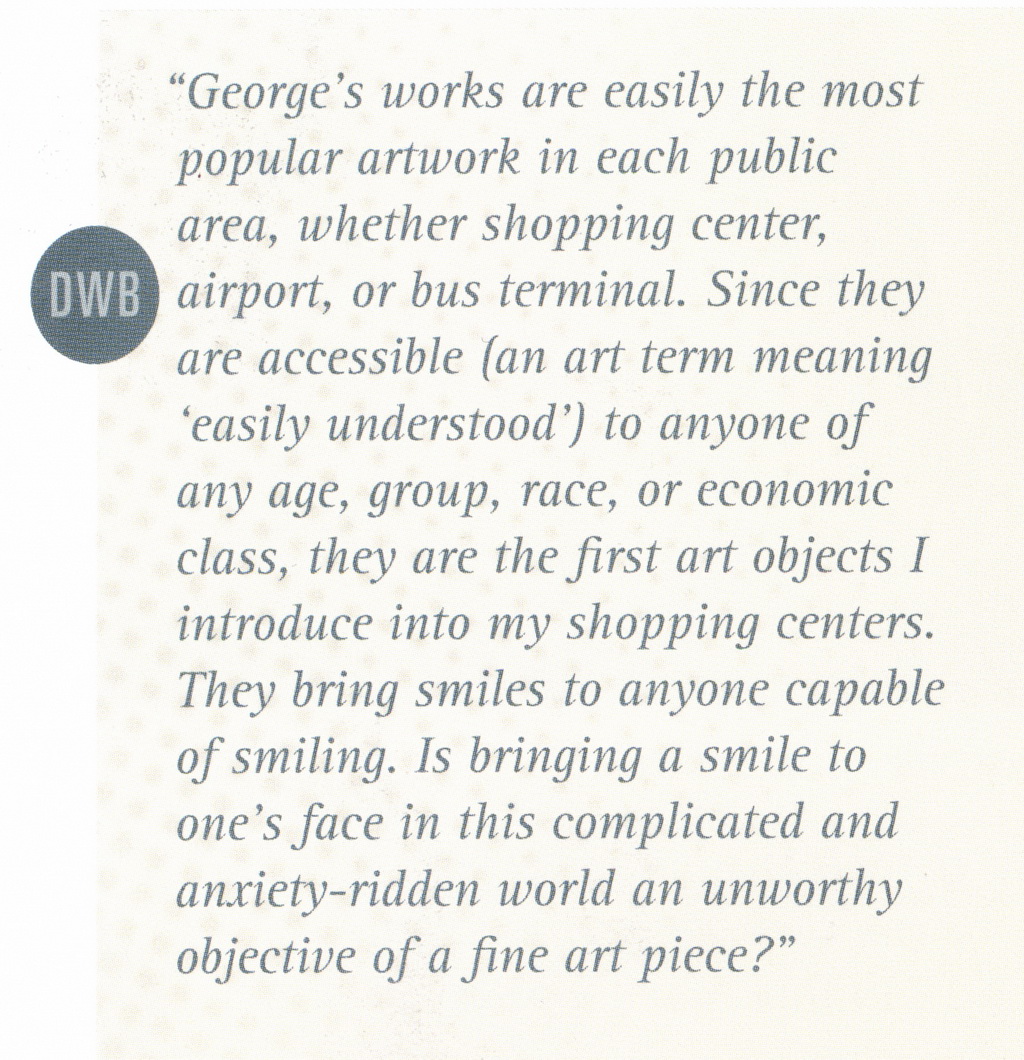 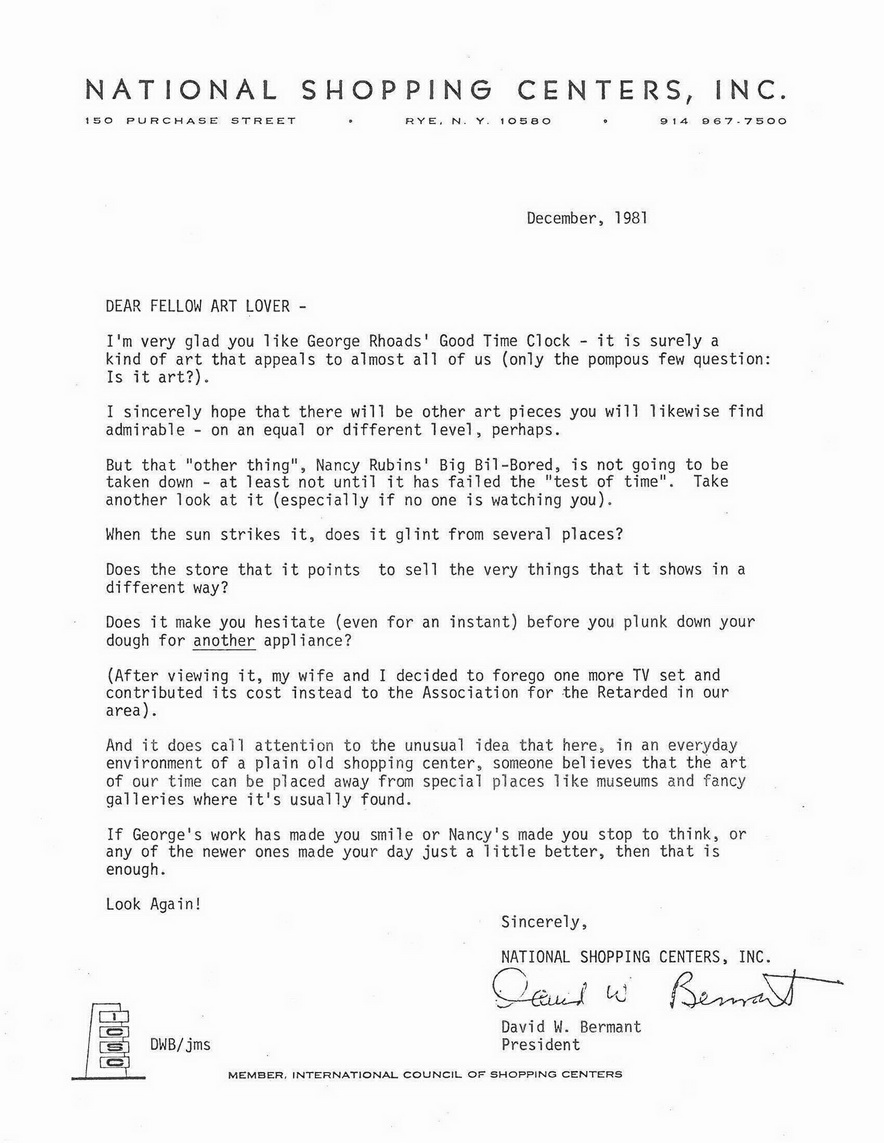 George Rhoads created at least 5 variations on the “Good Time Clock” for David Bermant including other pieces like Good Time Clock III at West Erie Plaza in Erie, PA and the Magic Clock at Hamden Plaza in Hamden, CT: 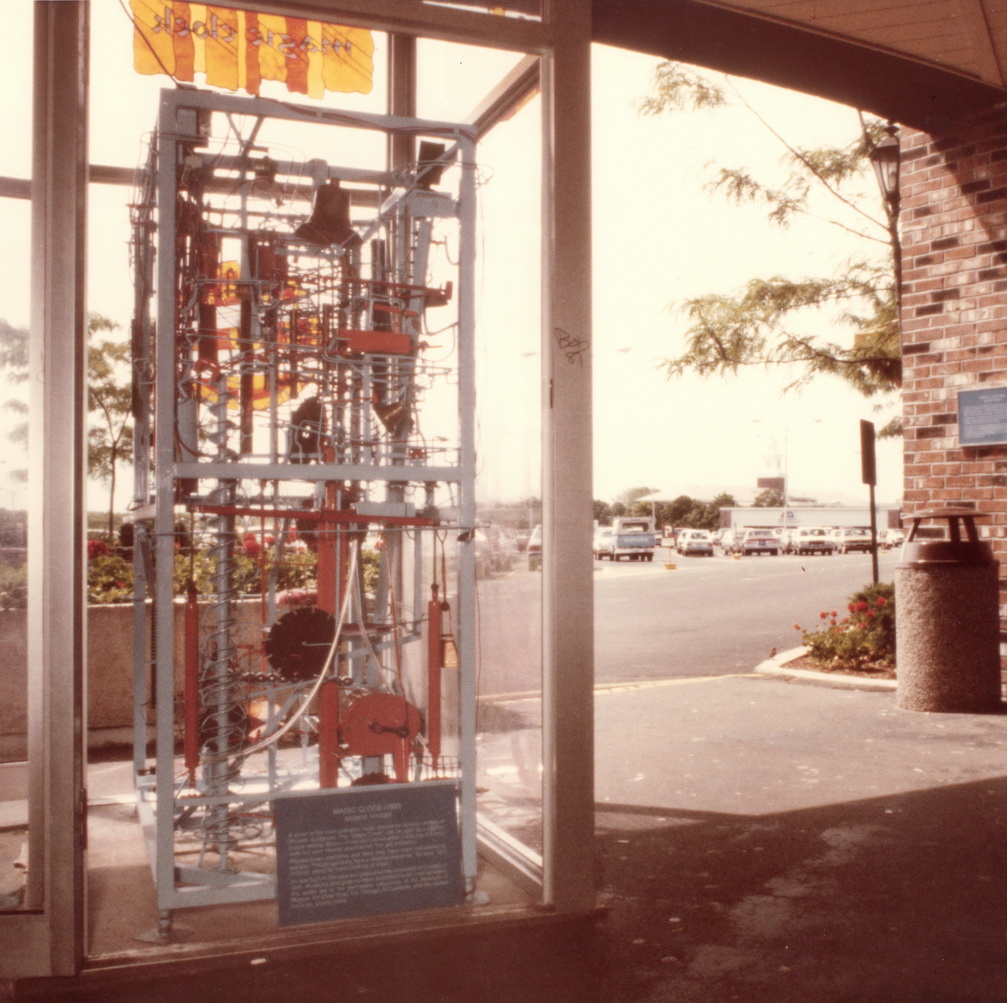 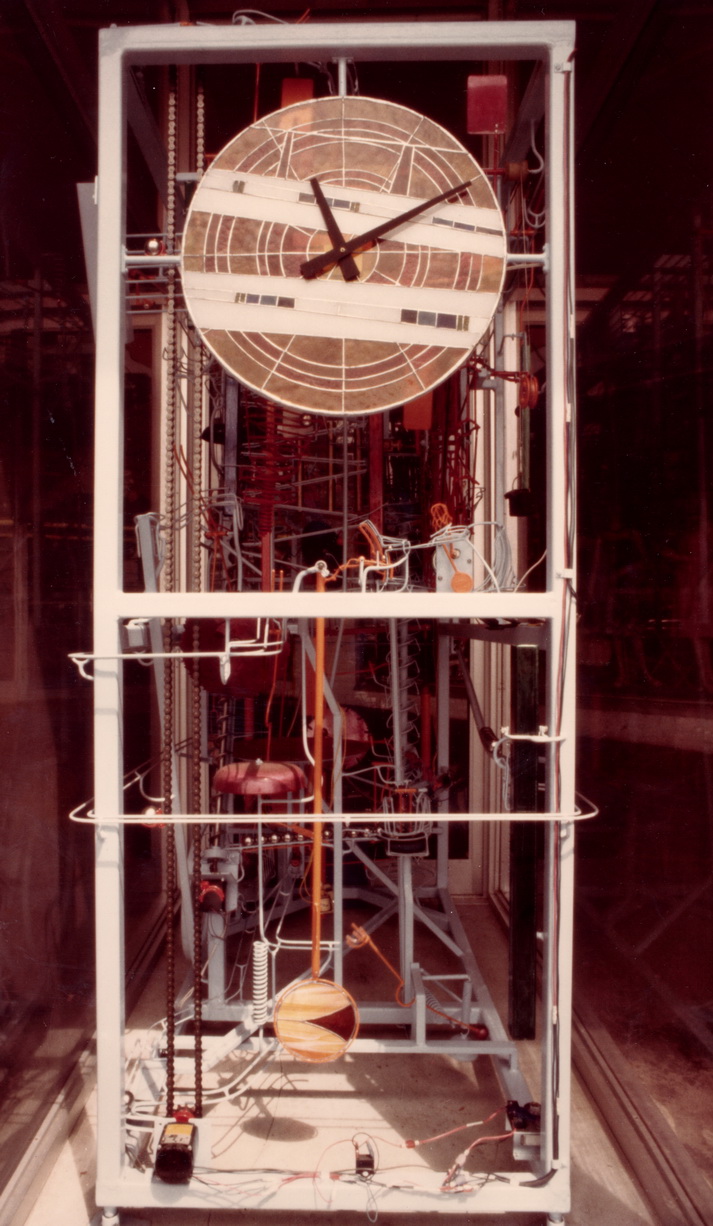 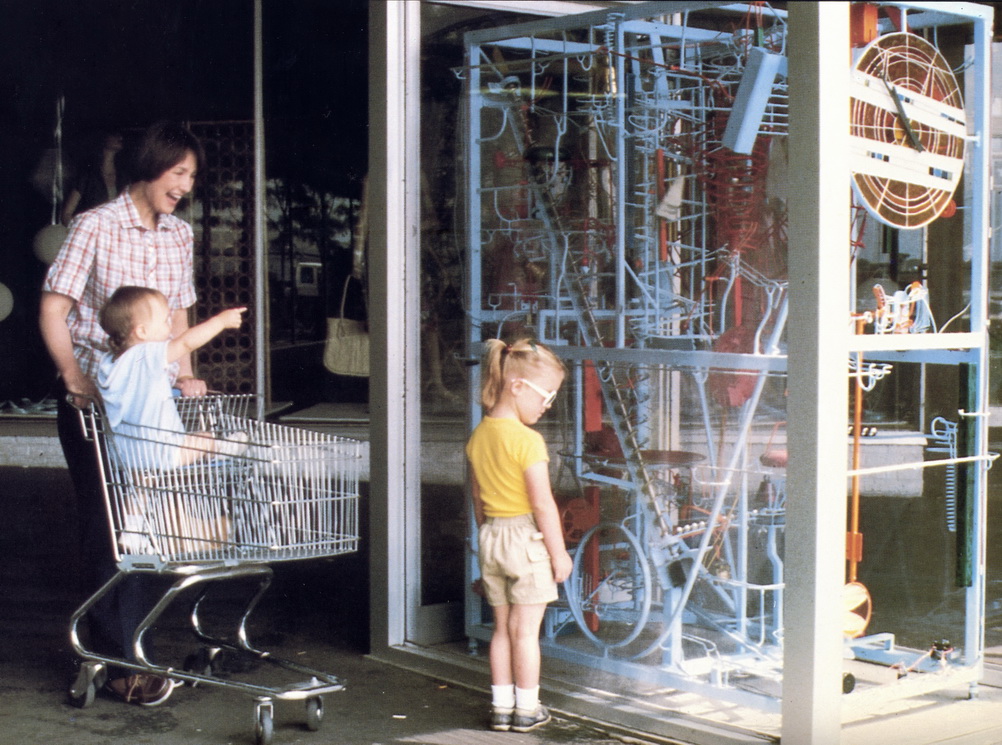 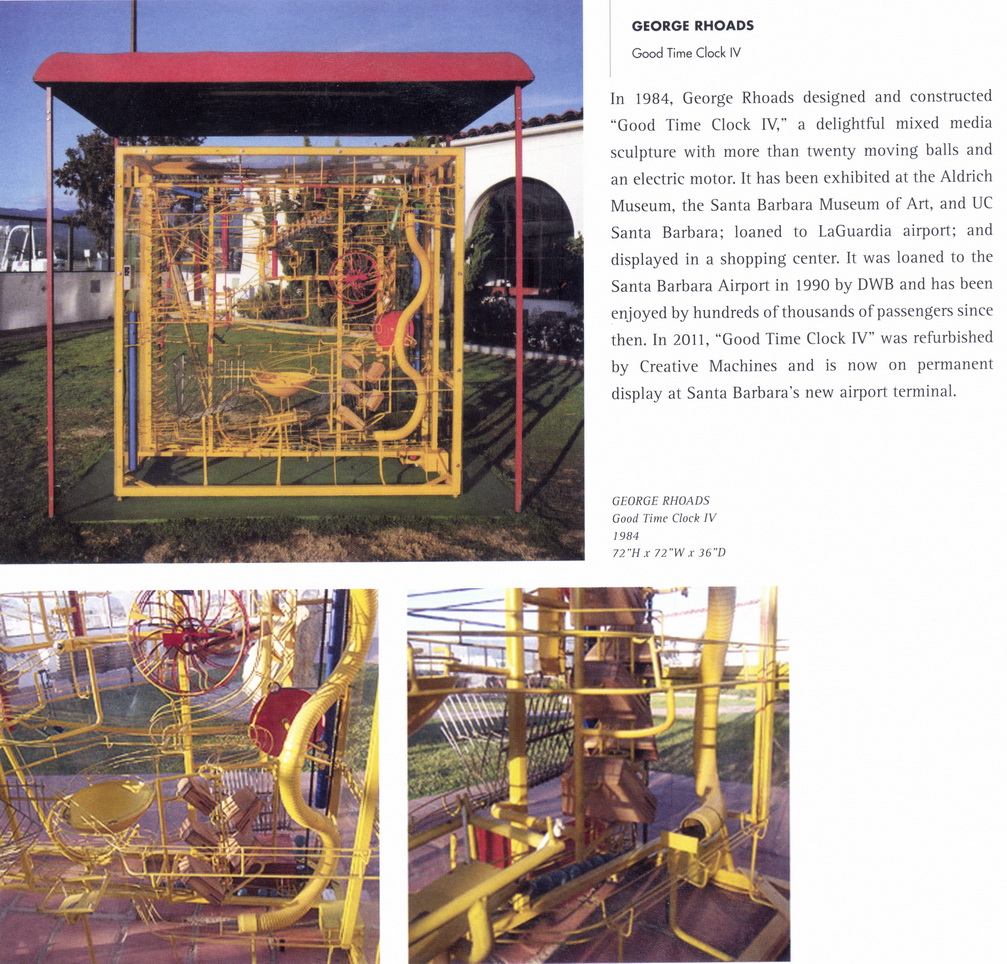 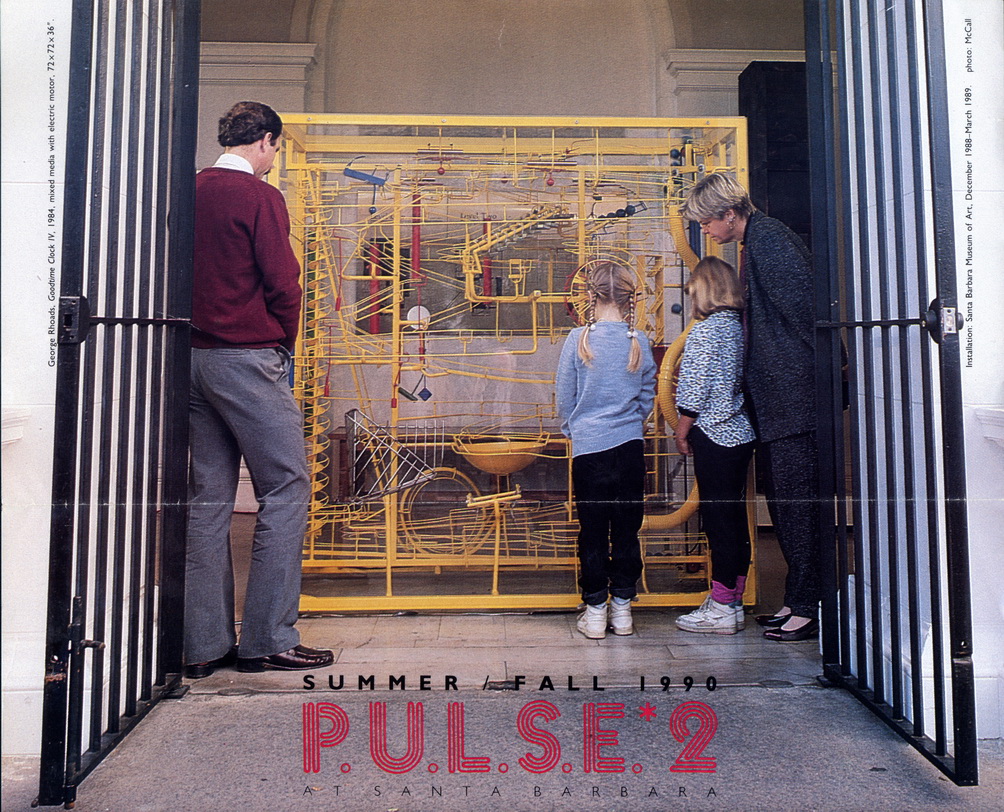 A video can be seen here http://db.artscicenter.com/project/good-time-clock-iv/?portfolioCats=32

Having A Ball (seen in the picture below) was a George Rhoads rift on the Good Time Clock.  It was installed as the backdrop of the elevator to the lower level of Allendale Shopping Center in Pittsfield Massachusetts.  Having A Ball used golf balls as a substitute for the metal pin balls in some of the other Rhoads clocks.  Having A Ball would start when a visitor would call the elevator to be transported up or down to the “Underground At Allendale”.  A glass rear panel of the elevator allowed passengers to view the activity of the piece as they rode down and up.  Balls moved fan shaped wind mills as they scooped up the waiting balls.  The clanking of metal and clacking of wood blocks sounded as the balls bounced and spun down the tracks.  Joseph Bermant was the long time manager of Allendale Shopping Center and also managed Cermak Plaza in the late 1980’s. 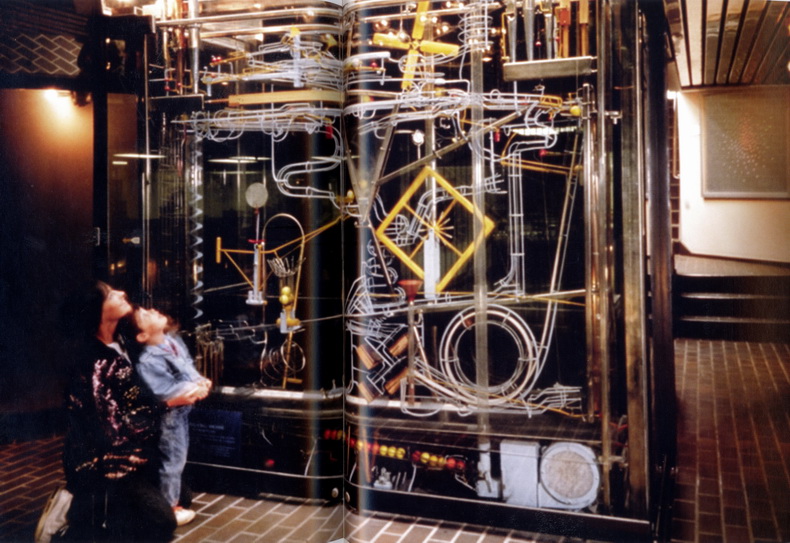 George Rhoads was born in Chicago, Illinois, in 1926 and graduated from the University of Chicago.  Rhoads has no engineering training, he is a painter and origamist.  His work has been shown on nationalTV shows and is part of the permanent collections of such museums as the Museum of Modern Art in New York and the Chicago Art Institute.

The Good Time Clock has been a fantastic addition to the shopping experience at National Shopping Centers properties.  Below are some of the reactions, reviews and interviews. 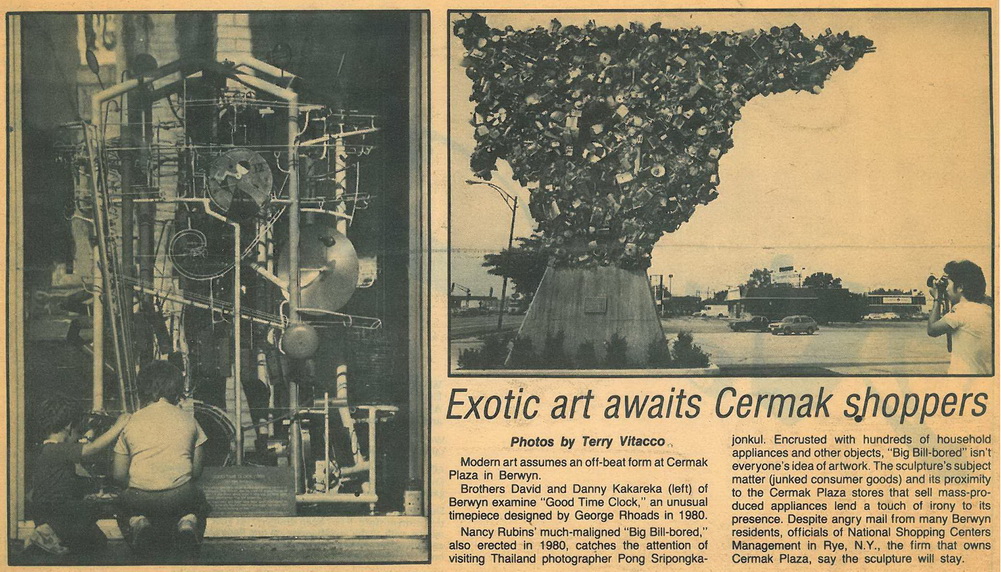 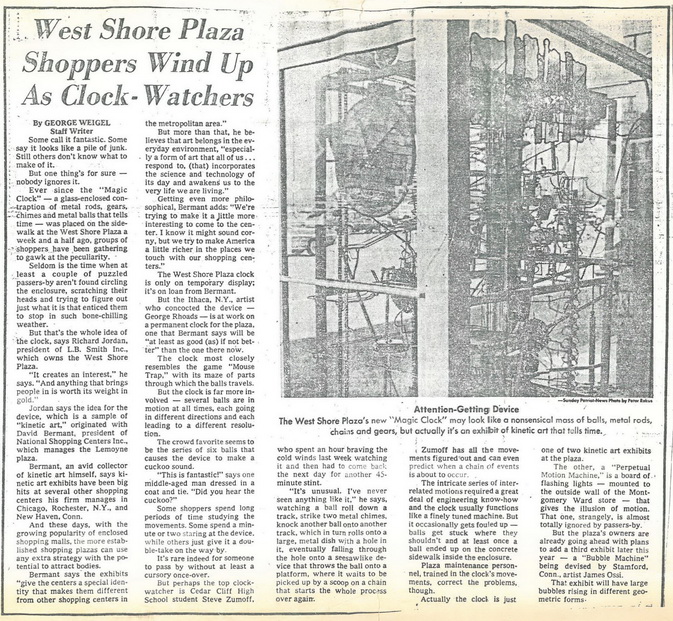 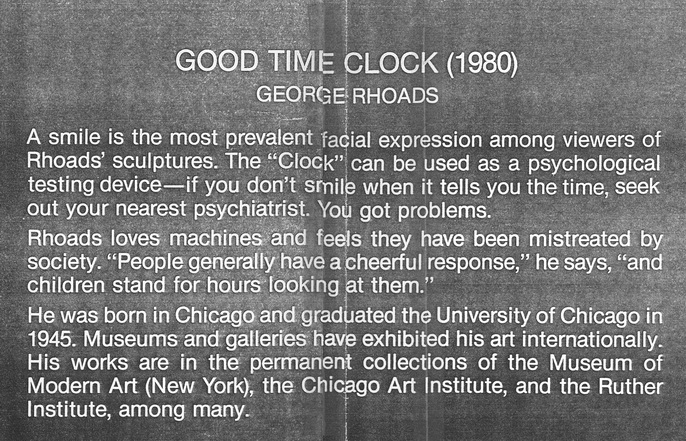